Country music superstar Brad Paisley will turn FivePoint Amphitheatre into one big Country Nation this Friday, 19th August 2022, as he brings the excitement of his 2022 World Tour into Irvine, California's famous venue. Joined by two of the nation's best country singers, Tracy Lawrence & Caylee Hammack, the three-time Grammy winner will perform his hit songs to thousands of spectators on a night celebrating his incredible artistry spanning over two decades. Don't miss this summer's biggest country music concert by grabbing your tickets as early as today! Secure yours by clicking on the "Get Buttons" link. 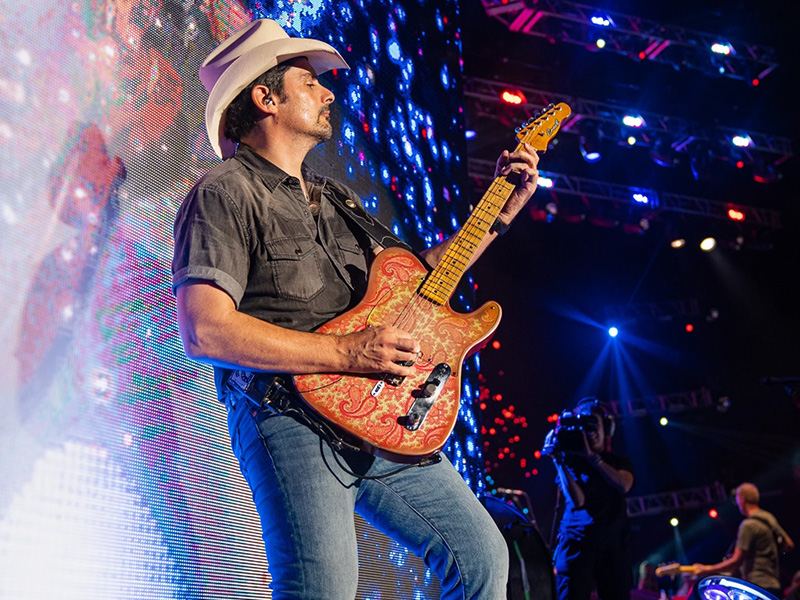 One of the most prominent names in the country music scene, the singer, songwriter, and guitar-slinger Brad Paisley rose to stardom in 1999 when his debut album "Who Needs Pictures" topped the charts. Since then, he has given his fans one hit after another by releasing 11 more successful studio albums. These albums propelled him to international stardom and enabled him to win countless awards and recognitions. The most notable of which include three Grammys, two American Music Awards, 15 Academy of Country Music Awards, and 14 Country Music Association Awards, including a highly coveted "Entertainer of the Year" distinction.

These awards are not surprising as Paisley has been dubbed by the media as "as a skilled songwriter and even better guitar player with a faultless band," "an impressive display of showmanship," "is the most consistently great performer," and "every year he manages to do something that makes it feel fresh and inspired." And this year, Brad is ready to give his fans worldwide the best concert experience of their lives as he takes his "Brad Paisley: World Tour 2022" to a whole new level.

Aside from the North American leg of his highly-anticipated tour, he will be stopping at major cities in Australia, Canada, and different European cities. These shows outside the US are his first since 2019, pre-pandemic.

This summer, Brad will be stopping at Irvine, California's BFivePoint Amphitheatre on August 19. He will be joined by the American country artists Tracy Lawrence and Caylee Hammack. Lawrence is an award-winning singer known for his most commercially successful albums "Alibis" and "Time Marches On." On the other hand, Caylee Hammack is an American country music newcomer who recently released an album in August 2020. Her song "Fooled Around and Fell in Love" with Miranda Lambert made her win the "Musical Event of the Year Award" at the 2020 Academy of Country Awards. She was also nominated in the New Female Artist of the Year category in 2021's edition of the prestigious award-giving body.

Catch these amazing artists with Brad Paisley in a memorable concert this summer.