It's a show two years in the making, as Matchbox Twenty head to FivePoint Amphitheatre on Sunday 28th May 2023 (Rescheduled from Sunday 29th May 2022) as part of their massive 50-date summer tour! The chart-topping alt-rockers were due to hit the road in 2020 for the first time since 2017, so fans have been patiently waiting and you can guarantee it'll be worth the wait! One of the hottest bands of the late-'90s, Matchbox Twenty have had no shortage of singalong hits like "If You're Gone," "Bent," "3 AM," "Unwell" and "Push," and they'll be performing them all at this very special show! Not only that, but they'll be supported by special guest act The Wallflowers! 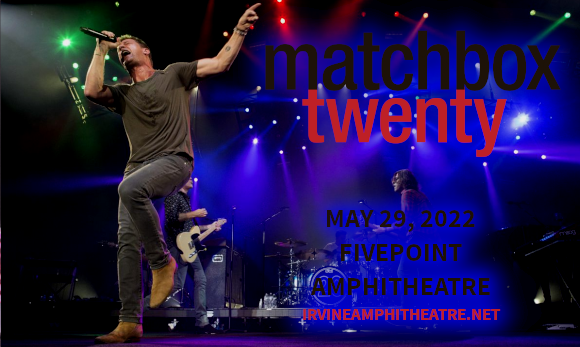 Orlando-based alternative rock band Matchbox Twenty were one of those rare overnight successes with their debut album Yourself or Someone Like You (released in 1996, just a year after they formed), which launched a number of radio-friendly hits that received widespread airplay throughout the late-’90s – "Push", "3 A.M.", "Real World", and "Back 2 Good". This, coupled with the enormous success of three-time Grammy Award-winning lead singer Rob Thomas’ collaboration with Santana, “Smooth,” led to the album selling over 12 million copies in the US and receiving platinum certification by the RIAA. It was also a worldwide hit, going 10-times platinum in Australia, eight-times platinum in Canada, and five-times platinum in New Zealand. They followed with 2000’s Mad Season, which spawned the Top 10 hit "If You're Gone" and the chart-topping “Bent”. More Than You Think You Are (2002), their third album, found similar success and marked their final album before a hiatus that lasted until 2007 when they returned with a 'retrospective' album Exile on Mainstream, which contained seven new songs, plus remastered versions of several of their hits. North, their fourth and most recent album, was released after another five year hiatus and debuted at number one on the Billboard 200.